Casumo Casino is a remote gaming company that offers online casino and slots for desktop and mobile players. Launched in 2012, the brand has proven popular and in 2015 entered the UK market with a licence from the UK gambling commission. This is why it gets my attention. Casumo.com isn’t just a powerful NetEnt site with quirky bonuses, it’s also the world’s first casino adventure! Let’s take a closer look at the rainbow game station and its weird inhabitants. 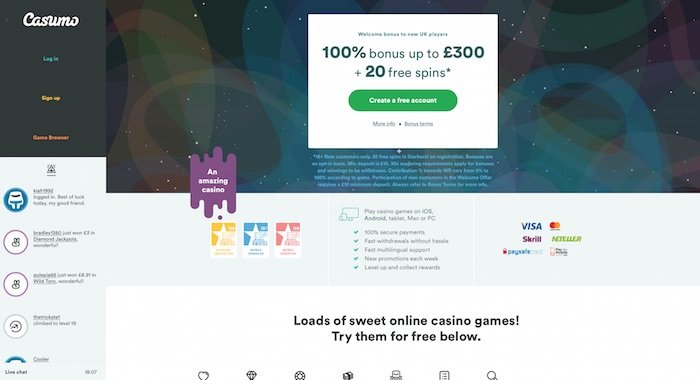 When I first heard the word Casumo, I was like, what the hell is this strange word. But investigate further and its a clever gaming concept. Take the NetEnt software suite, add shed loads of slots, bring the humour and make the whole thing something more. Not just online casino, but an adventure. We’re talking valuables, trophies, levels and planets. When you play at casumo.com, you play for something more. So that’s a good start. I like the idea of Casumo.

Looking at the website, it’s clear Casumo online casino means business. They know what they’re doing, they care about design and getting to know the website doesn’t take long. On the left of the screen you can monitor winners or players progress while front and centre is access to over 850 casino games. The game browser by the way is one of the best I’ve ever seen.

Designed from the ground up to make players smile, I’m in agreement with Casumo casino that they live up to that mission. It seems these Casumo people are actually making progress on stimulating online gambling. With the latest slots, total jackpots in excess of £8 million (when I looked) and the best rewards system on the planet, what we have here is a top UK casino.

The legitimate stuff is strong and is testament to Casumo’s long standing good reputation. It’s been around a while now (2012) and is well established. Looking over the T and C’s and there’s no real surprises. The current minimum deposit at the website is £10 (that’s fair) and current wagering requirements on the bonus stand at 30 x which is better than average. casumo.com is run by Casumo Services Limited and is regulated by both Malta and the United Kingdom Governments.

Casumo casino is all about game power, the casinos ultimate trump card. By working with lots of developers, you get lots of games. Some UK slot sites run dry on variety, no chance of that here. casumo.com is the size of 7 medium sized online casinos combined and that’s impressive. In total, Casumo, handles over 850 casino games capturing all budgets, genre and personal player interest. I have no doubt that Casumo will be one of the first casinos to reach 1000 games plus!

As I investigate the games, I’m overwhelmed. As I mentioned earlier, this is a very neat game browser. Everything is organised. This is a major design strength, having all of these games but still making it easy to find them. You can choose popular, new games, Casumo loves, live casino and jackpots. You can find games by type, still not enough? You can search by name.

Developers providing slots and games for Casumo include NetEnt, IGT, Barcrest, Play’N Go, Thunderkick, Microgaming and Quickspin amongst others. Some big names here. Basically, anyone who is anyone is putting their games here.

Some of the best games and newest slots I’ve found at Casumo include:

In Casumo Mobile Casino, game options remain extensive with more than 500 slots and table games for iOS and Android devices.

What I like more than anything is the casinos loyalty and tournaments. The world’s first casino adventure is all about loyalty, there’s no denying it. I’ve looked at other casino sites and they don’t come close, nowhere near. The levels here offer value to gameplay and that’s important when playing somewhere. When you join Casumo, you’ll notice a progress bar on the home landing page. The progress bar shows you how far your adventure has come. It offers a way to the next level and it’s worth free spins and free money. The higher the level, the higher those freebies get.

When you play for real money at Casumo you get points, belts, trophies and valuables. This is a rock solid loyalty system if I’ve ever seen one. Adding multiple tiers to strong incentives is a recipe for some decent gaming. Thumbs up.

Tournaments is another reason to get involved. Reel Races is Casumo’s way of turning slots into competitive cash chasing and it’s good fun. They run every 30 minutes and it’s a chance to win even more money. Easier said than done, but Reel Races involve trying to win as many times as possible in a given time period. It’s hectic, but there’s points and prize money up for grabs including £1000 cash every evening at 7pm.

Casumo.com is well supported and offers all the secure banking methods. There’s an added positive of pay by mobile phone for Casumo mobile casino players and this is very popular. Others include Visa, MasterCard, PaySafeCard, Neteller and Skrill. This is more than enough for most players and caters for the mass market. As for the minimal withdrawal, it’s £10 (same as deposit) and while Casumo offers fast processing (immediate) it will still take a number of days to reach your bank account. Online methods such as Neteller could be as fast as 2 days while bank transfer as long as 5 days. Don’t be disheartened, these are common numbers and shouldn’t be sniffed at.

Most of the big UK casino sites with UK Gambling Commission licenses don’t take chances with dodgy support models. That’s why the live chat at Casumo is all it can be, and it’s up there. Along with telephone support, email (slowest method but still within aimed within 1 hour response) the 24/7 live chat is super effective. But you won’t need it, the Casumo FAQ is well put together with all the common questions and solutions. Note: Casumo mobile casino does not support live chat.

Very rarely can I say ‘this is the gold standard’ for anything, but this casino is worth the hype. This is a remote gaming system like no other, boasting hundreds of games, new slots and jackpots on one of the industries most impressive platforms. As the worlds first casino adventure, it operates at a level that players will relish and with a genuine sense of care in what they do. Not settling for ‘just casino’, a website like this is constantly moving forward.

Why go anywhere else when it’s all here. Why choose one when you have multiple. Why play win or lose casino when you can play while your collecting extras along the way. That’s what happens here and it’s all done so very well. casumo.com gets a big thumbs up for Casumo mobile casino, huge games catalogue, top game browser and multiple loyalty levels.