The new UK online slots in 2017 are already coming in thick and fast. The 88 Fortunes slot has a giveaway clue in its title – the use of the number 88 points towards a Chinese-themed slot, since the number eight is thought of as lucky in China. Will it prove lucky for you as well, though? 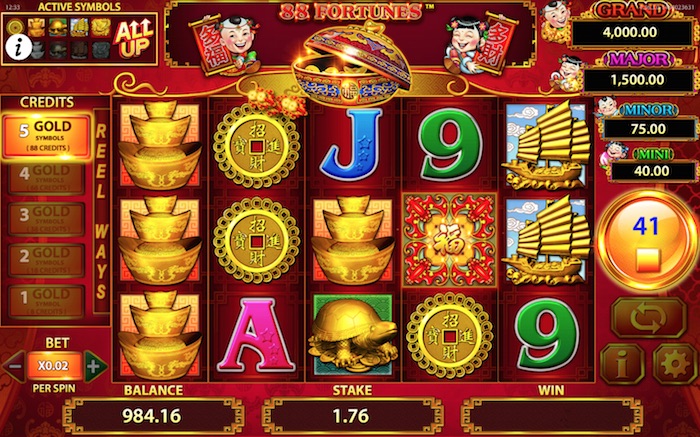 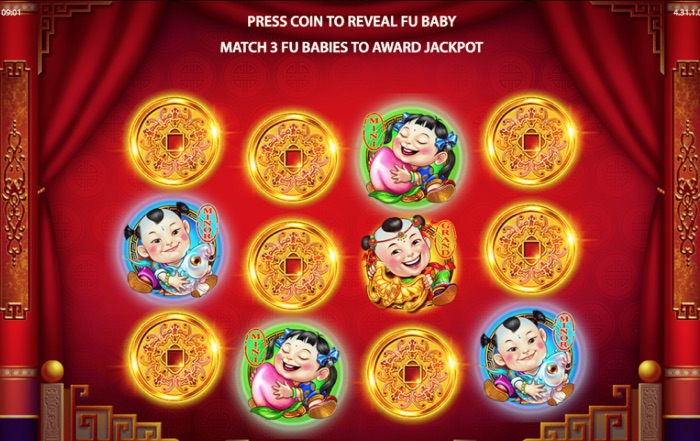 The 88 Fortunes slot is a five-reel slot game with 243 ways to win, created by Bally Technologies. It looks appealing, using plenty of golden symbols and featuring a red colour scheme. Since the game is based on good fortune, the presence of the number eight and derivatives of it, the red colour and the good luck charms all fit in very well.

88 Fortunes is jam packed full of Chinese luck with gold symbols and 4 jackpots!

There are other features on the screen – gold credits and active symbols, for instance – that might be confusing to start with. Hang tight, though – we’re about to explain how the whole thing works. You have a lot of control at your fingertips when playing Bally Technologies’ 88 Fortunes game. You might find the game isn’t as confusing as it first appears, once you’ve read our handy guide to it.

We’re treated to some superb graphics in this slot game. The Chinese figures at the top of the screen are detailed and look very happy! There’s also a golden decorative pot with a lid, featuring the promise of some gold inside. Yep, the game is heavy on the gold but it’s not distracting.

As for playability, you use the plus and minus arrows to determine your bet. Above this, you’ve got the gold credits feature. You can opt to play from one to five credits per spin, each option costing a different amount. Make sure you get the right combination for your budget before you begin. The credits relate to the golden symbols, so the more credits you play, the more symbols activate for that spin. These are indicated at the top left of your screen. (You can play in demo mode first to get the hang of how it works, and we’d recommend this for this game.)

Click the ‘i’ in the bottom right corner to see the paytable. There are five golden symbols, the standard A, Q and K symbols and a gong. There is also a wild symbol called Fu Bat, which appears on the middle three of the five reels. It will replace everything without exception if it can form a winning combination.

The paytable has five pages, and you must scroll to read all the information on some of those pages. Make sure you do, as it makes the golden symbols easier to understand once you read more about them.

Let’s get into the nitty-gritty of the 88 Fortunes slot game. We’ve covered the wild already, but what about those gold symbols? Basically, each one can appear as a standard symbol or a gold version of it. You must play with at least one as a gold symbol, but you can play up to five if you like. The first gold one appears on the first reel, the second on the second, and so on. These can grant special-pay wins.

The Fu Bat wild also has the power to award you one of the four jackpots. The more gold symbols you play, the more jackpots you become eligible to play for. If you have a chance to win one of several, you go to another screen where you must find three matching symbols to trigger that jackpot. It’s necessary to play at least two gold symbols to be eligible for the smallest pot.

Meanwhile, three or more gongs will bring 10 free games your way. You get another set of reels to play these on, and you can retrigger them as well. It’s also possible to win through to the Fu Bat jackpot feature while inside the free games, so it could turn out to be a profitable time!

You must wager at least 88p per spin on this game if you want to use five gold credits per spin, so it is pricier than some slots we’ve seen. Mind you, it does offer 243 ways to win instead of just a few paylines. One gold credit per spin makes a minimum bet of 8p per spin. The top bet is £88 per spin.

The maximum prize depends on the gold credits and bet level you choose. The highest prize for the maximum bet is £1,000 for getting five golden eagles on a line. You do also have the mini, minor, major and grand progressive jackpots up for grabs.

The return-to-player has been worked out to be 96% over time.

There will be plenty of new slots 2020, but the 88 Fortunes slot delivers more than your average five-reel slot and not just in the 243 ways to win feature either. With special features and four progressive jackpots up for grabs, it could provide a very happy start to the New Year for some lucky players.