If you’re keeping up with Playtech online slots releases, you’ll know the Age of the Gods slots series has just launched. The King of Olympus slot is the third of these, and it has the same familiar and appealing look as its two counterparts. It delivers some other perky features too, as you’ll soon see. 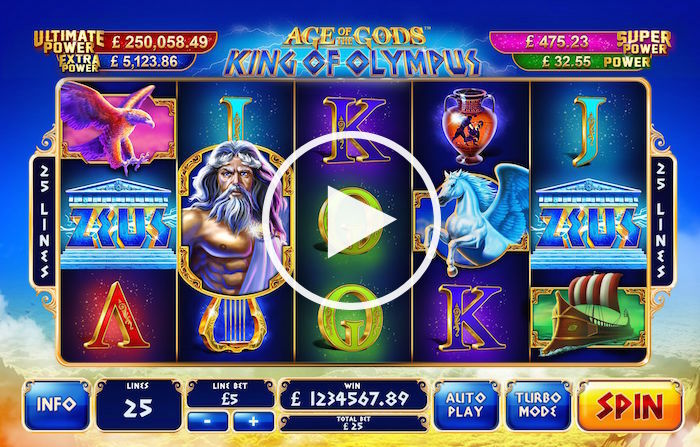 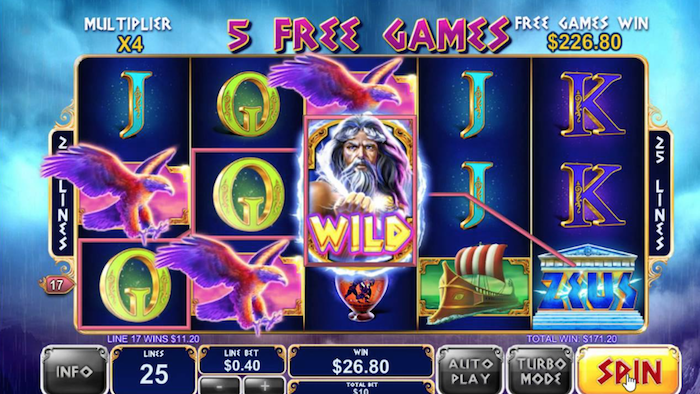 Age of the Gods: King of Olympus Slot Introduction

The Age of the Gods: King of Olympus slot is a 5×3 slot game that packs in 25 lines. Even if you have played Age of the Gods and the sequel, Age of the Gods: Furious 4, you should leave time to check this out as well. Greek gods make an appearance in all these games, and this time it’s the turn of Zeus to show up. So let’s see what he brings with him.

The New Playtech Slots look and play fantastic, King of Olympus is another great addition to the Age of the Gods Series. Adam Dale - Slotsquad

By now, the familiar dark blue of the reels won’t spring any surprises if you’ve tried the other two kindred slots. However, there are some different symbols here, as you might expect. The four progressive jackpots will be activated at the top of the screen if you’re playing real-money bets; otherwise they show as ‘not active’ in free play.

It’s very easy to play the game, too. You can play at the normal speed or try turbo mode, and there’s a convenient autoplay mode as well. You have to play all 25 lines, but you do have a chance to adjust the bet quite easily prior to each spin.

The paytable accessed by clicking the info button and as with the game’s two predecessors, the paytable is just as impressive as the game itself. The K, Q, A and J symbols look the same as the other games in the Playtech series, but the overall design is still very good.

Zeus must have a special feature, of course, and he does – he’s truly wild. The top prize of 3,000 coins achieved if you get five of the Zeus symbols on a single line. You will also notice a Greek building – the Pantheon, perhaps? – has the electrified word Zeus inside it. This is the scatter, and you have to get two or more in order to be rewarded. Other symbols include Pegasus, an eagle in flight and some kind of warship with a huge sail.

Age of the Gods: King of Olympus Slot Features

Since the other two Age of the Gods Playtech slot games have a wealth of special features, it’s reasonable to expect more of the same here. You can get 10 free games if you manage to find three Zeus scatters anywhere in one spin. These games feature an increasing multiplier.

Basically, you start with a 2x multiplier. After you play two free spins, the multiplier goes up by 1x. this happens after every other spin, meaning you get up to 6x on any prize you might win towards the latter stages of this game. You also get the benefit of an extra Zeus wild during the spins. He will appear and stay in place on the centre reel in the centre position throughout.

The other main feature is the chance to try for a progressive jackpot. As with the other two Playtech Age of the Gods games, these have special names, ranging from Power to Ultimate Power. Entry into the jackpot game is determined randomly. The good news is that if you do get into the game, you are guaranteed to scoop one of the four jackpots.

If you are fortunate enough to access the game, you can expect to see a 5×4 grid filled with gold coins. Each coin reveals the name of one of the jackpots. You have to click on these to turn them over and reveal what they say. Get three identical jackpot names to win that jackpot.

The game does require you to play every line, but that shouldn’t be a problem with a one-penny minimum bet per line. It makes the total minimum bet only 25p a go.

It looks as though the return-to-player amount is identical to those mentioned on the other games. The main figure we discovered was 94.99%. While we couldn’t find any information on how that changed according to the jackpot amounts, other entries in the series gave the adjusted RTP as 95.98% with the jackpot taken into consideration. There is every likelihood the same will be true of Age of the Gods: King of Olympus.

You only need to head for one of the Playtech slot sites online to find this game ready to play, along with the others in the trilogy. Whether you’re playing on your desktop or a mobile device, you’ll find the slot offers a thrilling experience. While this game doesn’t have as many special features as the other two Age of the Gods slots, it’s still worth a go.