How often do you see not one, not two but three new slot games released that come together to form a trilogy? The new Playtech Age of the Gods Slot series provides exactly that – and they haven’t skimped on special features either. The first game in the series is Age of the Gods, and we’ve put together the essential info for you below. 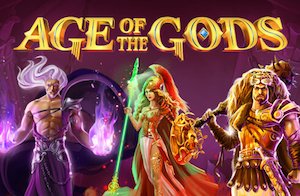 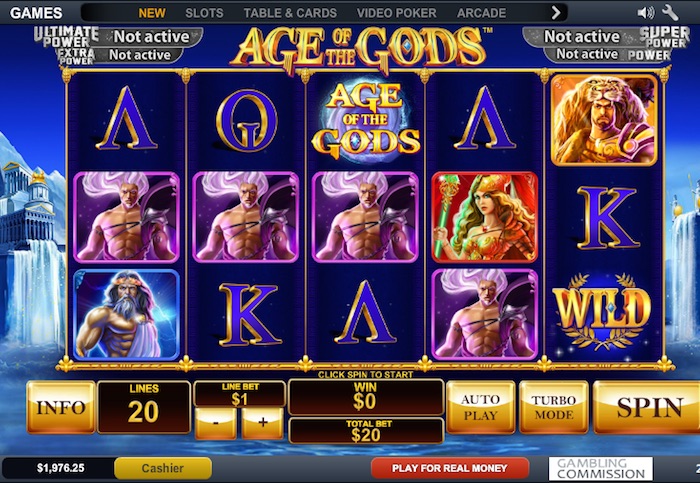 Age of the Gods Slot Introduction

Age of the Gods is a 5×3 online slot game featuring 20 lines. It’s presented with a pleasing blue hue to the reels, which ensures the symbols stand out when they appear. All the usual slot game features are included here, such as a wild and scatter, but as you’ll see, the gods themselves can also trigger some exciting features. Even better, there is a mobile version of this game to try if you prefer playing slots on your phone.

The Age of Gods Slot Series confirms Playtech’s position as a top slots builder in 2016 and beyond!James - Slotsquad Editor

Playtech mobile slots always look good; they have to in order to provide a good gaming experience on a small screen. Age of the Gods doesn’t disappoint here either. The background features Mount Olympus itself, home to the Greek gods that appear in the game. Every symbol is beautiful detailed, and while you do have the usual K, Q and A symbols in use, they don’t take anything away from the design of the rest of the symbols.

Even the paytable looks sensational, with golden writing that features in the game as well. Every god is represented by a particular colour that shines through in their symbol. There are six of them in all, including Athena, Poseidon, Zeus and Hercules.

There are six gods and six symbols, and each god must appear three times on an active line to trigger a win. Some gods are worth more than others, with Athena ranking highest in this respect. The wild is easy to see as it says just that. It will stand in for everything else apart from the scatter. It is also the only symbol that can trigger a payment to you for getting just two of them. The scatter is the Age of the Gods logo. You need three or more to unlock a bonus.

It’s definitely worth looking at the paytable before doing anything else. Sometimes you can get the hang of a slot without checking this first, but here we’d recommend having a quick look. The four free spins features and the extra bonus feature (or two) will make you even keener to try the game itself.

Age of the Gods Slot Features

This Playtech slot has a Pantheon of Power on Reels feature. This requires five gods to line up on any active payline, i.e. you need one of each god in turn on the line from left to right. Do this, and you will win 200x your line bet.

Next, there is a chance of unlocking the Age of the Gods bonus with three scatters. You have to pick three identical gods from the 20 icons provided to enter that god’s free spins round. Avoid getting Hades, otherwise the feature finishes and you don’t get the free spins. If you do win some spins, you don’t return to the main game afterwards. Instead, you go back to see if you can pick more icons to win more free spins.

If you get Athena, you’ll win nine free spins with a 2x to 5x multiplier before each one. The same number of games are granted by Zeus, along with locked wilds, extra wilds and multipliers. Poseidon gives you nine free games too, but his trident can strike up to five symbols with lightning with each spin. This turns those symbols wild. Finally, you guessed it, Hercules offers nine free games as well. He is a stacked wild on the centre reel in these games.

Finally, there are four jackpots associated with the paid version of the game (as opposed to free play). Entry into the jackpot round could occur after any paid spin. You’ll see another screen if you’re fortunate enough to trigger it.

It’s easy to adjust your bet per line by using the plus and minus keys below the bet amount. You have to choose all 20 lines, but that’s the best way to ensure you’ve covered everything. You can Play Age of the Gods for real money from just 20p to a whopping £500 per play.

The payout rate is 94.99% at the very least, but this doesn’t take into account the jackpot amount. This pushes it up to an impressive 95.98%. However, you’ll appreciate the thought that has gone into the game as a whole – and this is just the first episode in the trilogy.

New Playtech slots are always worth a look. Moreover, with Age of the Gods: Furious 4 and Age of the Gods: King of Olympus available to play after this one, Playtech has provided an experience that delivers in a whole host of ways. you simply have to try it to see.