Followers of the latest IGT online slots will want to have a closer look at the new Diamond Queen slot, which has just been released. This is a nice solid game with some good features, but will it soar to the top of your favourite slot games chart? The theme may not be too original but when you see the free spins and what they have in store, you might like the outcome. 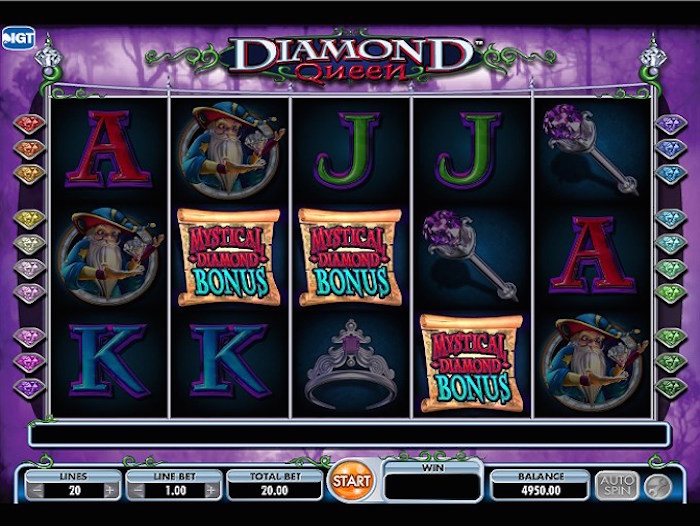 The Diamond Queen slot is a 5 x 3 online slot from the IGT stable of games, offering a mystical theme featuring wizards, a princess (or more properly, we suppose, a queen) and some valuable jewellery.

The popular offline game gets an online version with real credit to its free spins round!Adam Dale - Slotsquad

There appears to be a forest of some kind on the pinkish/purple background, but to be honest that’s not the main focus here. The symbols on the screen are designed to catch your eye, and hopefully they will win you some prizes too. The main perk is the free spins feature, which holds more promise than you might think. We’ll keep you waiting for a bit before we explain more on that.

All in all, it’s not the most imaginative take on a theme like this. However, we should be entirely fair and mention the creativity in this game in terms of the bonus free spins feature. This is worth playing the game for, to be sure.

The graphics are pretty good, all told. We’ve seen better, but we are being overly-critical there as we’ve definitely seen much worse too. The symbols become more animated if they form part of a winning line, and while they are not exactly in 3D, they do give more depth to the game in that sense. Try it and you’ll see what we mean when you win a prize.

The game is easy to play, particularly as it comes with a demo mode so you can try out the various features before parting with a single penny. Our one grumble is that there doesn’t seem to be an autoplay mode, even though the game rules state that there is one. It’s a minor hassle, though, to be honest. You’ll want to play attention as you play, and the odd click here and there isn’t much to be concerned about.

The Diamond Queen slot has a paytable link right at the bottom. This reveals more information about the base game awards as well as the bonus game awards via the free spins. You can also read the complete game rules by clicking on that link to open up a separate page that tells you all about them.

You need three of each symbol to win a prize on a line. The one exception is the IGT Diamond Queen logo symbol, which only requires two (or more) to win a prize. You can also check the layout of the paylines if you wish.

The question of whether this ranks as one of the best slots from IGT will depend on the details in this section – the real meat of the game. The Diamond Queen is a substitute and she can replace all other symbols apart from the Mystical Diamond Bonus symbol (it literally says just that).

If you get two of those bonus symbols on the middle three reels, you’ll get a 2x payout according to the amount you wagered. If you manage to get three on those three centre reels, you will gain entry into the Mystical Diamond Free Spins feature. This gives you three free spins.

This doesn’t sound like too many, but they come with a couple of nice added features. The second reel is completely wild for the first spin. You then get the third reel turning completely wild as well. And after that? Yes, you guessed right, the fourth reel also turns completely wild. So you have three reels entirely wild with just two spinning to reveal other symbols.

You also get guaranteed stacked symbols in this feature, so you can see they have designed it to be very rewarding indeed.

This IGT slot is played with credits, but each one can be worth from 1p to £10. This means you can play all 20 lines at 1p per line, giving you a 20p total bet. (You can play with fewer lines, but it makes more sense to drop the coin value to play every line if you can.) The biggest bet is £200.

The RTP on this game amounts to between 92.97% and 96.06%, which is calculated according to long-term play. This is lower than many other slots have offered, which is disappointing, especially if the lower end of the scale is more accurate.

Finally, the biggest prize you can win here is 1,000x your line bet for five game logos on one line.

The Diamond Queen slot provides a nice playing experience if you like mystical themes. It also builds on the template usually provided by a regular slot game, in that it does have a few extra features included in those free spins. Get into those, and the game takes on a whole new look.