The mere mention of a genie is often enough to pique our interest in a slot. The Genie Jackpots slot is a progressive jackpot slot that could lead to a prize that might just transform your life. But is it all about the hard-to-reach jackpot, or does it have more to offer? 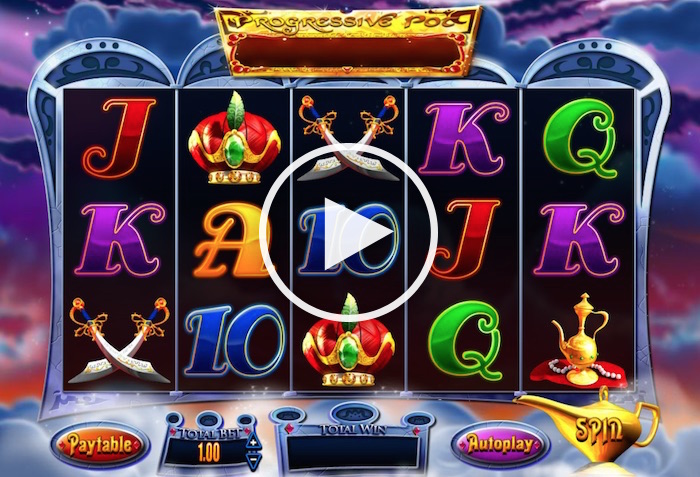 The Genie Jackpots slot is a 5 x 3 online slot game produced by Blueprint Gaming. Obviously it has a genie-based theme, and you will be hoping your main wish comes true by granting you the progressive jackpot. This is the big feature on offer here, but with that aside, there are many other delightful features to enjoy in the game as well.

The genie appears at the beginning and periodically throughout the game, and he seems to be a pleasant-enough chap. Take a look at the top of the screen before you start to play, though – the Vegas Jackpot is the big million-plus one at the top. But aside from this, there are four other progressive amounts to be won too. These are the Super, Major, Mega and Royal Jackpots.

We immediately liked the look of this game. The spin button is the genie’s lamp, from which he will sometimes appear. All the usual controls are situated at the bottom of the screen, making it easy to play whatever bet amount suits your budget. There’s an autoplay option available too.

The reels spin smoothly enough, and any wins are clearly indicated when they trigger. Your total win on a spin is given in the middle window at the bottom of the reels.

The payout table is just as colourful as the game itself. There’s a monkey wild symbol, which is rather useful in more than one way, and the logo for the game can appear stacked on any reel.

The biggest-paying symbol is the wild – five of these wins 500 coins. The logo symbol is only just behind on 400 coins for the same number on a line. You also have crossed swords, a lamp and a variety of normal 10, J and Q-style symbols.

Right – let’s answer the question you want to know regarding the Genie Jackpots slot progressive jackpot features. To trigger a shot at winning one of these, you have to reveal VEGAS spelled out on the reels – one letter appearing on each of five casino chips. Bigger bets stand a greater chance of triggering the massive jackpot.

Any spin you play is capable of triggering the Three Wishes Power Spin. This presents you with some magic lamps. You have to pick one to get one of these features:

This is a great feature because you never know when the Genie Jackpots progressive jackpot slot will trigger it. This makes every spin that bit more exciting. Keep looking for those lamps and when they appear, choose one to see how good the outcome could be for you.

We’ve mentioned a bonus already, and there is a bonus symbol that appears as the word ‘bonus’ on a green background. If you get two of these plus the Magic Carpet bonus symbol, you enter the Magic Carpet bonus feature. You can win up to 1,000x your bet in this round by moving Monkey along the magic carpets. Hit collect and you get your prize for reaching that stage. If you find Big Money, you’re in for a nice prize!

Two bonus symbols with a treasure chest bonus symbol grants the Mystery Win Bonus feature. The genie will reward you with a prize from his treasure cave in this round, and it could be worth as much as 100x your bet.

This game has one of the largest ranges of bets we’ve seen. Penny slot lovers will play it with a penny per line, totalling 20p to spin the reels each time. The biggest bet overall is a huge £500, so high rollers will enjoy this too.

The Magic Carpet bonus feature is capable of rewarding you with up to 1,000 coins if the luck is with you. However, the progressive jackpot is by far the biggest prize. One player from Hertfordshire won a huge £1.35 million playing the game, so it is possible to scoop something amazing.

Finally, we have the return-to-player stat to look at. You’d probably expect it to be slightly lower overall given that progressive jackpot, but actually it still comes in at 94.29%.


Play at Pots of Luck Casino

It’s not difficult to find a whole host of UK progressive jackpot slots. The trick is to find one that offers an entertaining experience overall. The Genie Jackpots slot really does nail the task of providing a slot that has more than just a big jackpot. Play it now and see how lucky the genie could be for you.