There is a nice selection of real money slots based on famous films and TV shows. One of these is the Ghostbusters slot from IGT – back in the news now thanks to the cinematic revival. But does this game from yesteryear still pack a punch today? 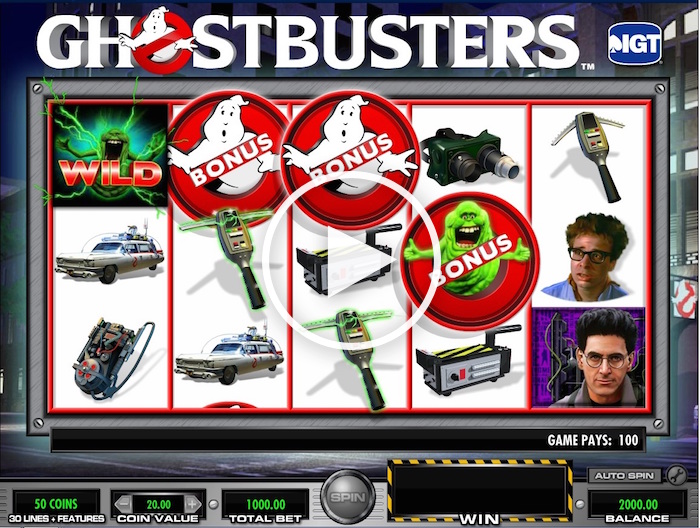 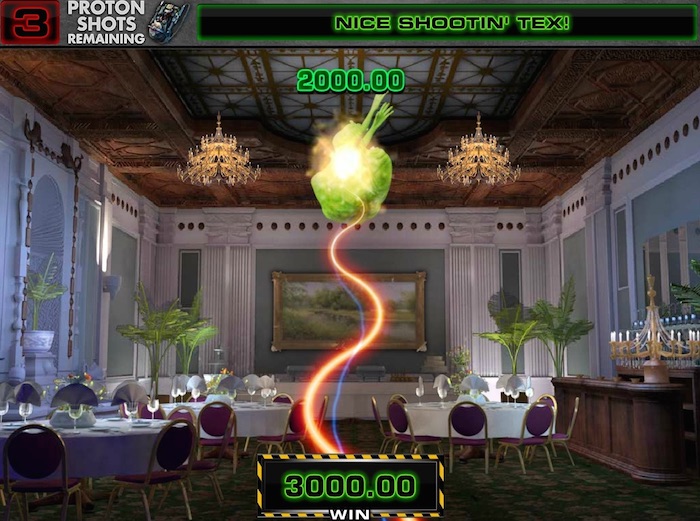 The Ghostbusters slot game is a 5 x 3 slot with 30 paylines in play. It’s based on the original film and features all the main Ghostbusters in action. The slot has a vague suggestion of city streets behind the reels, but you can’t really make out any detail.

It’s a 2D Game, but Ghostbusters makes up for depth with some spooky features!Adam Dale - Slotsquad

You will spot the main Ghostbusters logo splashed across the top of the screen though, not to mention messages about the main features the game has in store. We can’t help but feel the design is a little disappointing – this could have had so much more. But then it has been out a while and we’re sure a makeover would come in thrilling 3D were it ever to happen.

It does score highly in the range of bonus features it might pop up with. We’ve got news on all those shortly, and we think you’ll like them.

The graphics do leave a little to be desired. This is a 2D game that has a variety of relevant symbols alongside the characters themselves. The spin button is right in the middle at the bottom of the screen, and you can control your coin values here as well. There’s not really much else to report there; the game doesn’t have an autoplay option, for example.

It’s easy to play though, so beginners who haven’t tried this sort of film-related game before might find it a good one to start with. The game rules and the paytable are easy to find at the foot of the screen as well.

Hit the paytable button and you’ll see the main characters are worth more than some of the other icons associated with the film. Their car is one of them, and various pieces of ghost-busting equipment can also be found there.

Let’s look at the Stay Puft Free Spins feature first. This is played on 40 lines, so you have 10 additional ways to win with each free spin when compared to the main game. in order to trigger these spins, you have to get two ghost bonus signs plus one Stay Puft bonus sign. You get different symbols in this, including two different wilds.

During eight free spins, you have a chance of getting marshmallows on the reels. If you do, each one will lock into place as a permanent wild for the remainder of your free spins. Meanwhile, if you see the Win Meter open and accept a marshmallow, get ready for a prize of at least 50x your triggering bet, and as much as 1,000x your bet.

The second bonus in the game is triggered by getting two regular bonus symbols plus Slimer on the third bonus symbol. This puts you in the ballroom, where you have five proton shots to try and reveal ghosts hiding in the room. You get to fire all five shots and prizes can be subjected to a multiplier of up to 5x your bet.

Finally, there are four mystery features that can trigger after any regular reel spin, unless a spin unlocks a bonus. This could give you a multiplier on all line prizes, one to three wild reels, extra wilds or a cash reward.

The cheapest bet on the Ghostbusters slot is just 50p a spin. This is one of those games that gives you a bet amount per line plus a little extra to play all the bonus features. These have to be played, which is why the minimum bet is 50p and not 30p (i.e. 1p per line). Mind you, why would you want to miss out? In addition, the biggest bet here is £30.

The biggest standard prize in the main game is 500 coins for five wilds. However, the free spins feature gives you a chance to win up to 1,000x your triggering bet if the win meter snags a marshmallow.

If you like UK slot games based on famous film characters, the IGT Ghostbusters slot is a nice one to play. They haven’t skimped on the bonus features, and that should result in more people giving this slot a try. The one thing that lets the game down is the lower RTP, but if you’re a fan of Ghostbusters you might overlook this. In truth, it does provide some fun, so the Ghostbusters IGT slot could be one you enjoy having a go at.