Ever heard of an elk? You may just come face-to-face with one if you play the Great Wild Elk slot, newly-released by NextGen Gaming. That alone should make you want to give it a try, as NextGen Gaming slots tend to be very reliable indeed in terms of quality. And for our money, this one can confidently be put in that esteemed category as well. 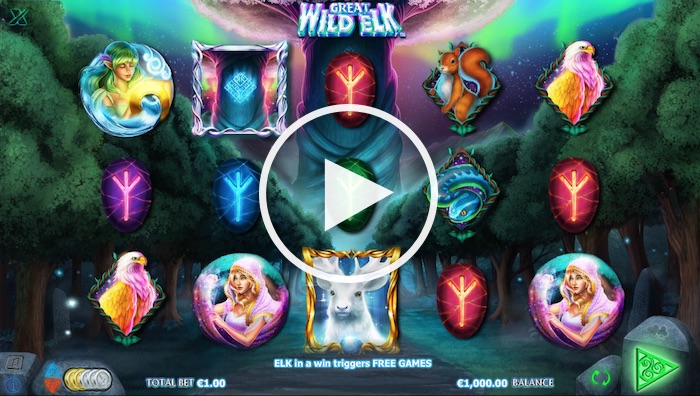 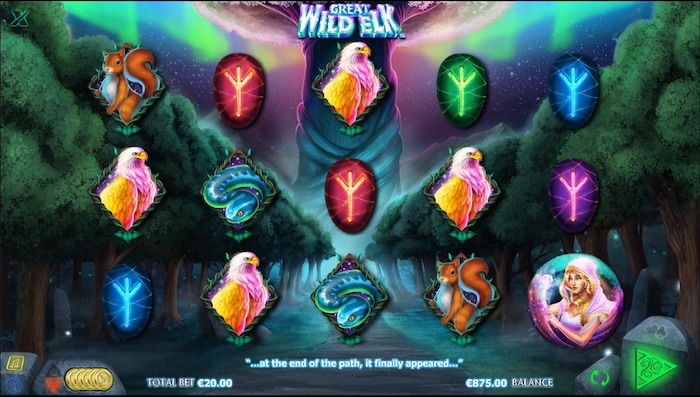 The Great Wild Elk online slot from NextGen Gaming is a 5 x 3 slot game with ten paylines. That’s a little less than some games this outfit has released, but the game is no less thrilling for that.

In fact, they’ve crammed in so many assorted features into this game, it’s hard to see how you could get bored with it in a hurry. But before we get to those, it’s worth mentioning how much effort NextGen has put into the game. It feels very different to regular slots we’ve played. The mystical forest-bound game is hardly the most original of themes, and yet this one feels so new and innovative. Will you agree?

The Great Wild Elk slot has a mystical feel to it, to be sure. You’ll spot this the moment the game loads and is ready to play. We have to spare room to mention the graphics. The Northern Lights dance around in the sky in the background, and the forest you play the game in looks as deep as any you’ll have encountered in real life. Watch for the dancing bright lights as you play, too.

All the game controls are easy to use and don’t detract from the game itself. You’ll soon be ready to take the Great Wild Elk NextGen slot for a spin. And if you want to check the pay table, you only need click the ‘i’ on the left, tucked away at the bottom.

See that little ‘i’ in the corner of the screen? Squint and move your cursor in that general direction and you can see it light up and say ‘info’. That’s the pay table and it’s chock-full of all the details you’ll need.

Aside from all the special symbols we’ll come to in a moment, you’ll see a couple of… shall we call them forest sprites? Fairies? We’re not sure, but they pay well! There are also some forest creatures and an assortment of runes.

The white elk is the wild. It has the power to replace almost everything else the game can offer. The scatter is the one exception to this (that’s the tree, which appears with a mystical bright symbol on it). Incidentally, the elk only ever appears on the centre reel. The tree appears on everything but the middle reel.

There are four runes in the game as well, of varying colours. These have the power to transform into one of five other characters before a spin starts.

If you manage to get an elk as part of a winning line, you will get between four and 10 free games for your troubles. The amount you win with the help of the elk is called the Enduring Win value. This is important because if a tree should appear on the reels during a free spin, you will be rewarded with another Enduring Win amount. If you win with the help of an elk while the free games are rolling, you get the chance to increase your Enduring Win as well, and it will stay at the higher value until your free games are over. The elk on the third reel stays expanded in position for the free spins, too. It just gets better and better!

Even when the free spins end, the game isn’t over, you have an Elk’s Light feature as a possibility as well. This shows up at random. You will see either a squirrel, an elf, a spirit, an eagle or a snake. Whichever one is revealed will replace any runes appearing on the reels for one spin only.

Call of the Elk feature

And as if that wasn’t enough. The Call of the Elk feature then triggers a re-spin. In this instance, you can win with scatters and scoop another Enduring Win too if you’re lucky. Get one of those scattered trees and you get another re-spin as well. We managed to do this and notched up some nice wins as a result. The detailing in the game really stands out in this feature, too.

The smallest line bet is just a penny, so if you multiply that by the number of lines in the game (10 of them), you get the 10p minimum bet to play all the lines. The biggest coin value is £2, so it isn’t possible to bet more than £20 at a time.

The jackpot is 500x your bet if you get five scatter symbols on a single spin. The second-highest paying symbol can deliver up to half that.

The return-to-player is given in the pay table, and it amounts to a theoretical 95.19%.

The Great Wild Elk slot is one of the latest slots from NextGen Gaming to be released. Suffice to say it’s been worth the wait. It’s ten out of ten from us for this one.