Based on the American hard rock band who have sold over 100 million records, Guns N Roses slot from NetEnt features a playlist of their best hits. Mixed with bonus games that use band members, an encore of free spins and a 2000 coin jackpot. 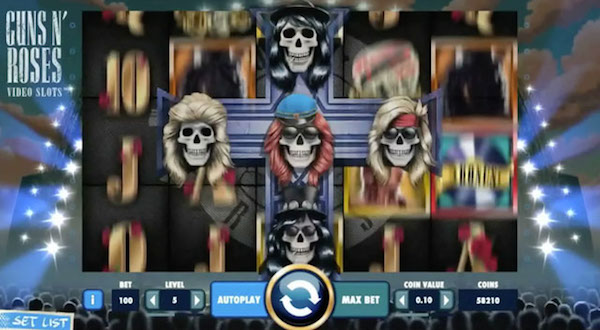 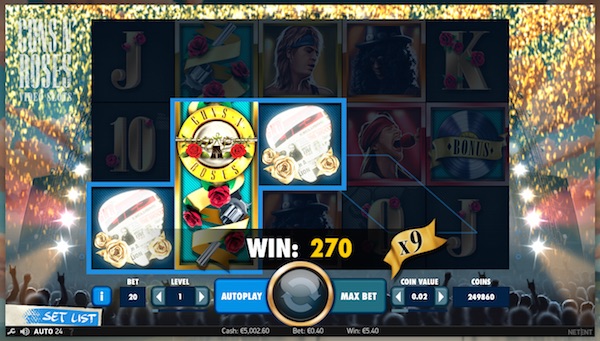 The Guns N Roses Slot is a NetEnt powered 5-reel 20 pay line music-themed casino game based upon one of the world’s greatest rock bands Guns N Roses. Players can spin on mobile, tablet or desktop to the soundtrack of some of the groups best anthems. Also you can spin to win from just 20p per play. As far as mobile slots go, the Guns N Roses Slot sounds fantastic and sets the stage for a great atmosphere while rock and rolling the reels.

At first glance, it’s easy to spot why Guns N Roses, is a current headline act at numerous top UK casinos. Because the gameplay is more riveting than ever, and using band members such as Axl and Slash within the core bonus game adds to the authenticity.

But what will attract real money slots players is the Appetite for Destruction Wild and a Bonus Wheel. Just two of the games six potentially worthwhile bonus features. 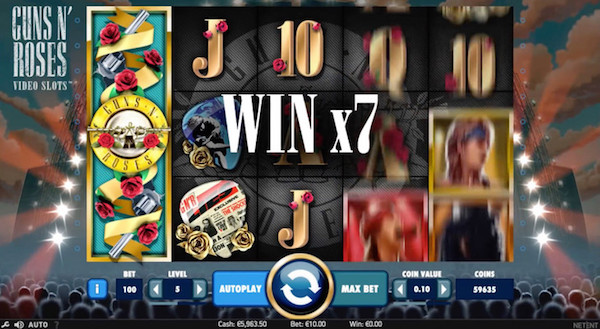 The first thing you’ll notice about the Guns N Roses Slot is the soundtrack; the second is the sound effects. It’s pretty much the same as a mobile slot too only players will need good headphones to get the same benefit.

On graphics and we’re looking at 3D visuals, a transparent 5-reel frame, a moving crowd and a stage with shimmering lighting. The Guns N Roses Slot Symbols are cartoon illustrated and well-detailed. As well as the animation of the reels is smooth and playability scores high, because a random bonus and multiple features. You can also select different Guns N Roses tracks during gameplay.

The Guns N Roses Slot Pay Table is made up of an upper and lower symbols. All music related, the cartoon illustrated symbols include card values 10, J, Q, K and Ace decorated with roses. These are lower tier symbols paying up to 125x. Upper tier symbols pay more and include plectrums along with Guns N Roses band members. Axl Rose, for example, pays up to 750x with 5 of a kind. 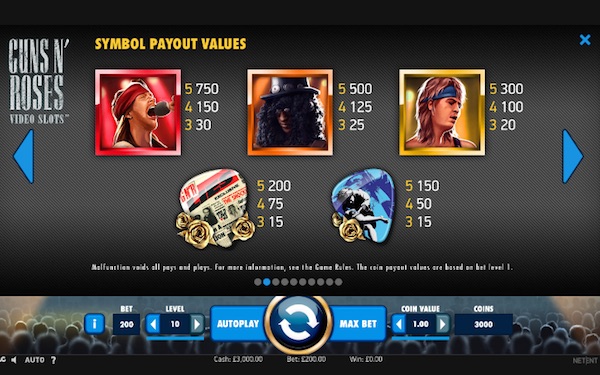 The Guns N Roses bonus symbols, those important symbols that cash players will be rooting for include the Wild (Guns N Roses Slot Logo), the Bonus Wheel (Vinyl Record) and the Appetite for Destruction Wild Symbol (cross overlay shape made up of Band Members). In-play random multiplier symbols are also present and can appear top right of symbols.

NetEnt uses Wilds, Free Spins, Pick a Win, Random Game Intervals and a Bonus Wheel amongst others in the Guns N Roses Slot as follows:

Guns N Roses Appetite for Destruction Wild – Larger and more powerful Wild this time as an overlaying cross. The Appetite for Destruction Wild is one of the slots random base game bonuses and can appear in one of three locations on the reels. If you get this Wild center, you can stretch out for almost any win and be paid the highest winning combination.

Legend Spins Game – Another randomly activated bonus game within Guns N Roses that awards 3-respins with 1 or 2 Stacked Wilds depending on the outcome. During the Legend Spins re-spins, the Stacked Wilds offered will shift to different reels following each spin.

Solo Multiplier – Creative aspect from NetEnt and most welcome in any base game where cash play is concerned. Solo Multipliers randomly connect to winning pay lines and increase payout capacity from 4x – 10x on those wins, nice feature, but you won’t get this on any Wild related wins.

3 x Bonus Wheel Games – 3 Bonus Symbols (Vinyl Guns N Roses Record) appearing anywhere on reels 1, 3 and 5 will award one of three Bonus Wheel Games. Encore Free Spins, Coin Win and the Crowd-Pleaser Bonus. In general terms, these are the better of the bonus games taking place above the base game with the Encore Free Spins the most valuable as it offers 10 Free Spins on Guns N Roses, the other two games include a pick a win and a cash prize coin win.

The Guns N Roses Slot offers a free play demo mode and an active-play game for real money slots players. If you’re playing for cash, coin levels range from 0.01 to 1.00 with 10 levels of betting available. On 20 fixed pay lines it is 20p per spin as a minimum bet and £200 per spin as a maximum bet. The jackpot for Guns N Roses is 2000x, and the payout rate is 96.83%. With this many bonus games, that’s fairly reasonable.

Guns N Roses takes online slots entertainment to the next level; it’s responsive for mobile slot players, and it’s completely atmospheric. With a concert crowd that reacts to winning moments, a playlist of 5 top tracks and multiple bonus features, Guns N Roses is the current headline act for new slots coming in 2016. NetEnt pays tribute to one of the world’s greatest rock bands with 5-reels of groundbreaking gameplay from just 20p to watch the show!