There are plenty of popular NetEnt slots for UK players to try, and we’ve got another one here in the shape of the Hall of Gods slot. We’ve seen a few Greek mythology slots coming up recently, but NetEnt has switched to Norse mythology to deliver an appealing slot game here. 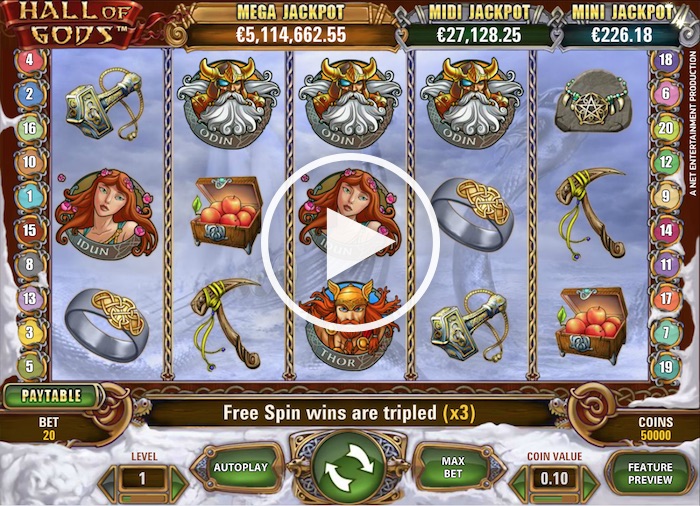 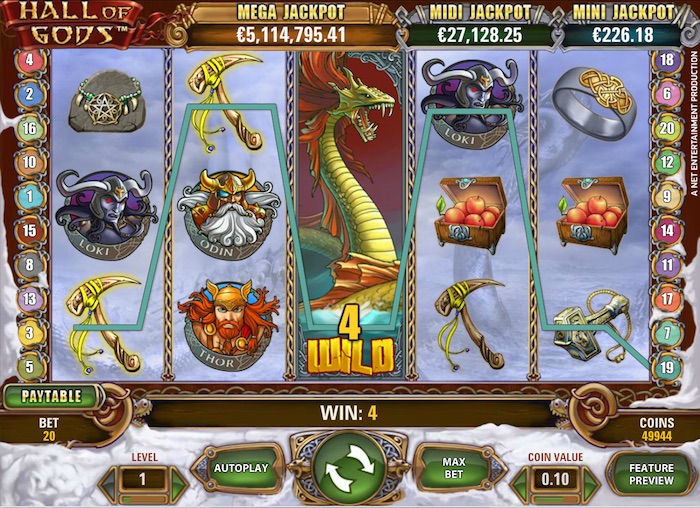 The Hall of Gods slot from NetEnt is a 5 x 3 progressive jackpot slot game with 20 paylines, and is based on the theme of Norse mythology. Relax – you don’t need to know much about Norse myths to enjoy this game. The characters in the slot are all named so you’ll learn more as you play anyway.

This is one of those slots that really doesn’t have a background to speak of. The controls are all under the reels as per usual, and the three progressive jackpots in play for real-money players are above the reels. At the time of writing, the mini jackpot was over £600 and the midi jackpot had reached £131,793. But the mega jackpot is the one everyone will be playing for… and that has reached a whopping £4,243,460! Yep – over four million pounds. Wouldn’t that be nice to win?

And that’s the biggest attraction in this slot – the chance to win a life-changing amount of money. But there’s more to it than that.

The graphics are impressive on this slot, especially since it’s not a 3D effort. A winning line and combination is clearly shown each time you get one, along with the prize you’ve won. Most of the symbols merely flash or light up, but the wild does something more…

It’s superbly easy to play the game too. The NetEnt Hall of Gods online slot provides an autoplay feature for easy play, not to mention a demo mode in case you want to see how it works first.

The payout table is located just below the first reel. This reveals Odin, Thor, Freya, Loki and Idun as the five Norse characters used in the game. Odin is the biggest payer, delivering 4,000 credits for five on a line. Strangely, all but Idun bring wins for two symbols on a line, whereas Idun requires at least three.

Various other symbols appear as well, and a plan of the paylines in play is also given to make things clearer.

If you haven’t played the Hall of Gods progressive jackpot slot before, let’s delve into the special features to see how it works.

The wild serpent expands to fill the entire reel if it appears on the second, third or fourth reel, thus increasing your chances of more wins. It can replace all the Norse characters and other symbols, but not the bonus hammer or the scattered ravens.

Odin’s ravens can deliver free spins for finding three or more. You’ll get 10, 15 or even 20 of those games if you get three, four or five raven scatters. You can add on more free spins if you find more scatters while playing – again, at least three. Every win on a free spin nets a 3x multiplier on the prize.

The most important symbol is Thor’s hammer. This is the bonus symbol. You need three to trigger the bonus game which is where the progressive jackpots can be won. You’ll be shown a variety of shields, and you have to break them with the hammer to try and reveal three matching amounts. You could uncover a nice prize… and you may even uncover one of the progressive jackpots. Here’s hoping you do.

We should mention the difference between the overall RTP at 95.5% and the RTP without the 6.9% that contributes towards the jackpots. This makes the RTP on the standard game just 88.6% – lower than you’d expect for slot games in general.

That aside, you can play the slot from just 20p per spin, which amounts to just a penny per line. It’s not one of those slots that forces you to play a higher amount for a shot at the jackpot either. The amount you could win does correlate with the bet you placed, however, if you do get that lucky. You can play as much as £50 per spin if you want bigger regular prizes in the main slot though. You can also play up to five coins on every line.

Finally, the jackpot in the standard game is 4,000 coins for five Odin symbols. The progressive jackpots vary depending on how long it’s been since they were claimed, but the major one has reached over £4 million at the time of writing.

The big question is whether the Hall of Gods slot is one of the best NetEnt slots they’ve released. Answer? It depends what you want from a good slot game. If you like lots of neat features, then yes, this slot does have quite a bit to offer. And if you only ever like to play progressive slots in the hope of netting a huge prize, the slot has those as well. Maybe it’s time you stepped back into Norse mythology?