There have been some good Play N Go slots released already this year, and we’ve got yet another newcomer for you here. The Hugo slot doesn’t give much away by its title, unless you’re familiar with life in Scandinavia. The troll who gives his name to this particular slot is famous there, so let’s see whether his fame will become more widespread as a result of this game. 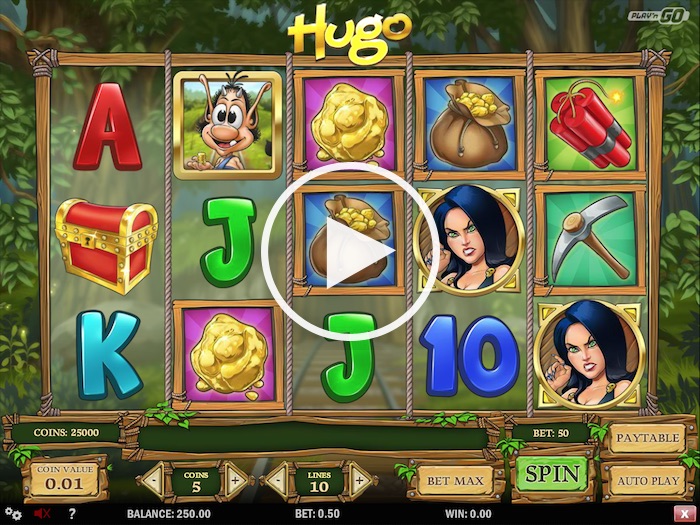 The Hugo slot is a 5 x 3 online slot game from Play N Go featuring 10 paylines. Hugo turns out to be the name of the troll who takes centre stage in the game. He’s quite famous in Scandinavia, but few people outside that part of the world are likely to have heard of him before now. That’s all set to change thanks to Play N Go’s wonderful rendering of his world and some of the features it depicts.

The opening scene shows a railway track leading into a mine, and after an explosion Hugo appears – a cute one-toothed troll who then disappears into the mine. This isn’t random – you too might have the chance to head into the mine as the game progresses.

If you take too much time in between spins, Hugo appears and bangs on the screen, which is a nice if unexpected touch the first time you see him. You won’t want to pause for too long though, as there’s lots to enjoy here.

The graphics are quite nice, although we do feel the game is let down by the inclusion of some basic K, Q and A symbols. There must have been some other symbols relevant to Hugo that could have been included, surely? 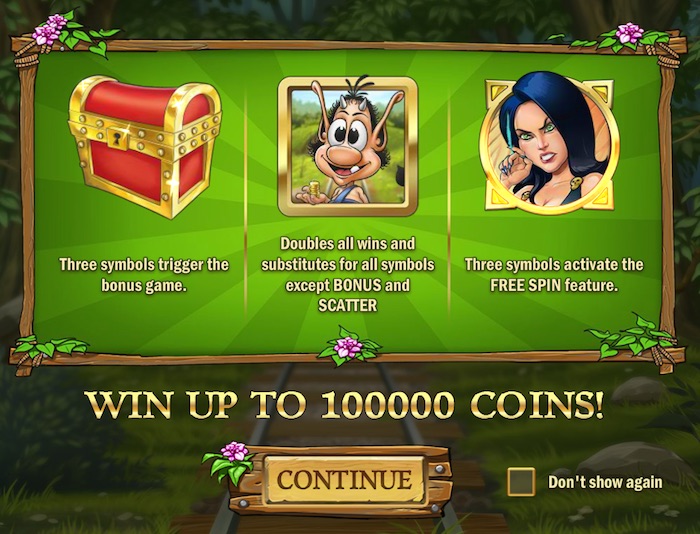 It’s a minor grumble though, because the remainder of the game is nice to watch and easy to play. All your normal game controls are at the bottom of the screen. The paytable is easy to see too – reassuring, because some games seem to go out of their way to make it hard to find.

The paytable shows you the standard low-paying symbols – five of them, from A to K – and the four higher-paying standard ones. These are a gold nugget, a bag of gold, some dynamite and a pick-axe, so all relevant to the mining theme.

You’ll also learn about the wild and scatter, which we’ll tell you more about below, and the two bonus features the game has to offer. The paylines are also indicated on the paytable, but there’s really no need to know exactly how they appear.

Huge is rightly chosen as the wild in the Hugo slot, and he’ll double a prize whenever he takes a position as part of a winning combination. As usual though, he won’t replace any scatters that appear. The scatter is an evil witch known as Afskylia. She’s not all bad though, because if you get three of these scatters on the reels you’ll get some free spins. 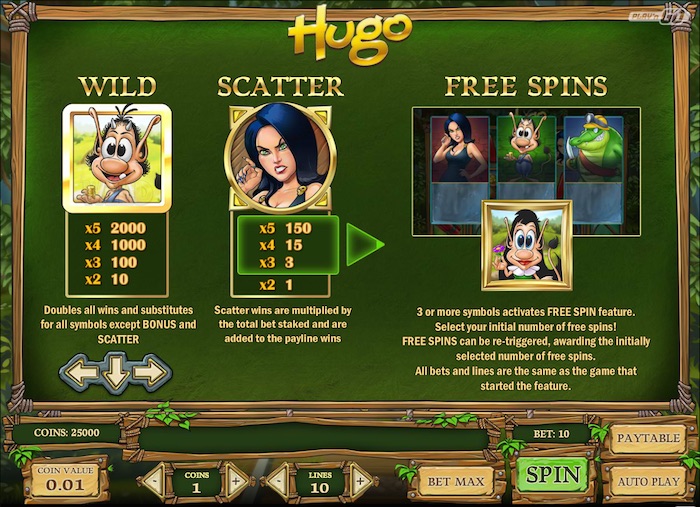 When this happens, you choose how many free spins you will start with. This can be either five, 10 or 15 of them. There’s a catch though – the more spins you choose, the lower your multiplier will be on each appearance of a scatter. Five spins win you a 3x multiplier, while 10 delivers a 2x multiplier. 15 free spins won’t have a multiplier at all. You can retrigger this, and you can also get another scatter appearing in the shape of Hugoline – Hugo’s other half.

There’s a bonus here too. If you get three treasure chests appearing on the odd-numbered reels, you’ll unlock entry into the Treasure Bonus and the mine itself. You are asked to choose one of the doors. Choose correctly and you proceed to the next set of doors. Each successful choice wins a prize. Avoid Don Croco, an evil crocodile, as he’ll eject you from the maze and it’s game over. 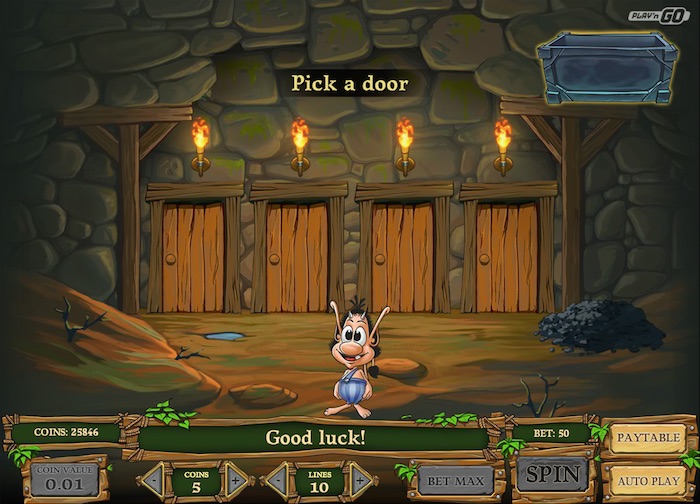 The opening screen you see before loading the actual game reveals you could win up to 100,000 coins on the Play N Go Hugo online slot. The top prize for collecting five Huge wilds is 2,000 coins, so that’s not bad for the main game.

You can start betting from as little as a penny per line, so playing all 10 lines would incur a small 10p minimum bet amount. That makes it easy to cover all the available lines regardless of your budget. You’ve also got the option to play up to five coins on each line, and to increase the individual coin value to as much as £2 a time, leading to the £100 maximum bet for five coins per line.

The return-to-player percentage here is 96.4%, so that’s reasonable enough. We’ve seen higher percentages but not by a lot.

Many UK slot sites look set to offer the Hugo slot to their players. But would you go out of your way to play this? For our money, it’s definitely worth a wager. Even if you have no idea who Hugo is, it plays as a fun game with some nice features built into the gameplay. With free practice play and autoplay on offer as well, it’s easy to see how this could turn into a popular game.