When you hear the word ‘simple’ associated with an online slot game, it can put you off wanting to play it. However, that’s not the case with the Illuminous. This is a beautifully-designed game with sharp graphics and enough to keep you interested. It all centres on hot reels, as you’re about to find out. 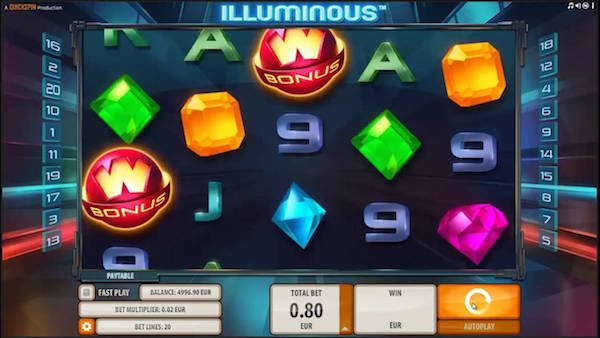 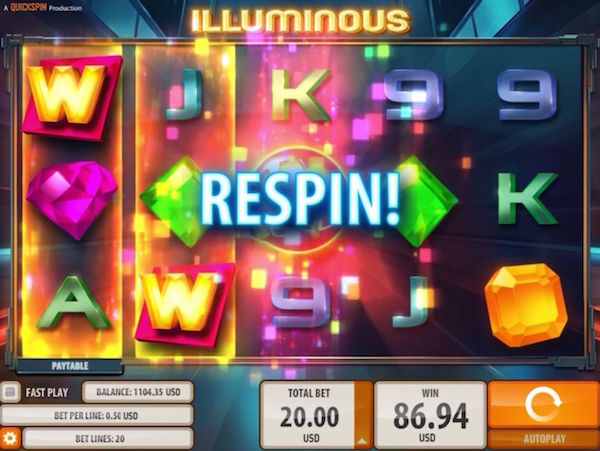 The Illuminous slot packs in a 5 x 3 format with 20 pay lines in all. It offers you a bonus wild scatter symbol (sounds confusing, but really it’s a wild and has some nice quirks to it, as I’ll explain later) and a standard wild. The real gem in this game is the presence of hot reels and comes into its own when you start playing.

What can I say? The graphics are superb. It may all look very simple (there’s that word again), but Illuminous could well be one of the smoothest-running and sharpest 2016 slot games you’ll see this year. The symbols light up when you get a winning combination. While there aren’t too many engaging symbols – we’ve got a selection of gems as well as the regular King, Queen, Jack and so forth.

The hot reels are the nicest feature, and if you manage to get two or three reels with good symbols on the right at the start of the game, the reels will glow, and you’ll see it takes longer to spin the remaining reels to a stop. You’ll also stand a chance of getting some bigger wins during any free spins you might have, which means there’s a good opportunity to rack up some prizes in quick succession.

The medium-win symbols are all coloured gems in Illuminous. The purple gem is best, as five on a pay line will secure 500 coins. The yellow gem is next best, followed by green and blue. You’ve then got the regular symbols for lower-value wins, from 9 and 10 through the usual symbols and up to the Ace.

Three of either the wild or bonus wild scatter symbols will get you 50 coins while five of each would grant you 500 coins. This slot may not have the same amount of special features or symbols as other UK slots, but I think it’s got more than enough to keep you entertained.

Okay, here’s where the fun really starts. If you get two bonus wild scatters in one spin, you will get a respin. Let’s say the first and second reels had the scatters on them. In this case, those two reels will be turned into Hot Reels. These are great to get because you’ll get additional wilds on them – which in turn means you could win more prizes during the re-spin. If you manage to get more bonus wild scatters on the reels in the re-spin, guess what – you get another one.

It’s worth trying Illuminous in the practice mode first. Even though you don’t bet anything and, therefore, won’t win anything in this mode, it’s the best way to see how the Hot Reels work. It won’t take long to trigger them, and you’ll see they glow when in play. To win real prize money, you’ll need to bet a minimum of 40p on the reels. It covers every line in play, but you can go as high as £80 on each spin if you want a chance of some serious prize money. The game has an RTP of around 96.5%, which slots in nicely with many other UK slots on the market at the moment.

If you’re looking for a basic game with a little more to offer, I think Illuminous is a good contender to fit the bill. It plays beautifully, with superb graphics and a smooth performance that puts a lot of other games to shame. You may not be familiar with Quickspin before you give this slot a try, but the chances are you’ll want to find out more about their other games when you see how good it is.