The Kooza slot doesn’t give away much in its title, but when we tell you it relates to the Cirque du Soleil, you may have an idea of the theme. Kooza stands out among the new online slot games we’ve come across, and there are several reasons why. 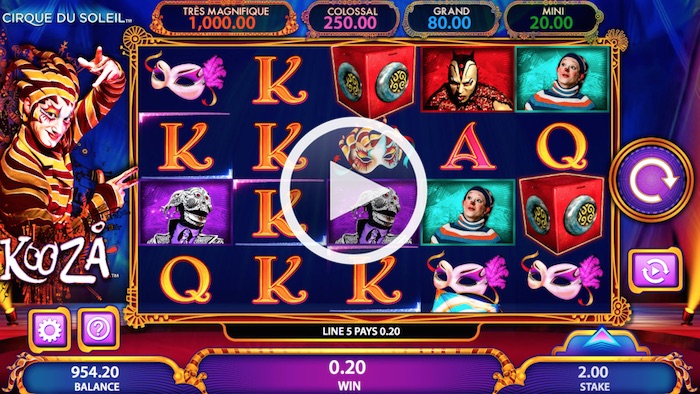 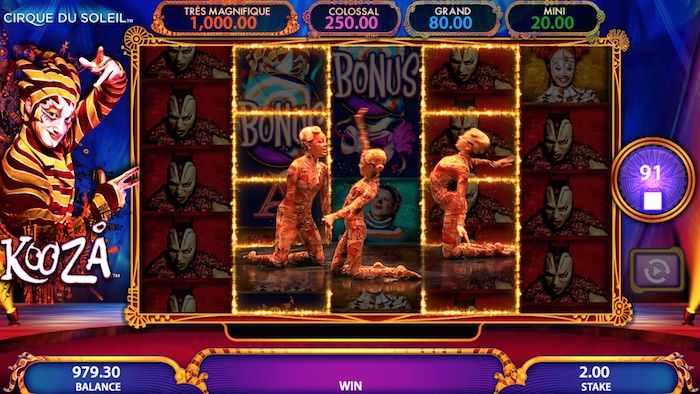 The Kooza slot is a 5 x 4 online slot from Bally Technologies, based on the famous Cirque du Soleil show. As such, it is colourful and features a variety of characters, including a jester on the left side of the reels.

The game uses photographic-quality pictures of the people involved, and the detail is good because you can play the game on any device, from mobile to tablet and through to your computer. It’s packed with features, too, which is another reason this slot stands apart from the rest.

No prizes for guessing the graphics are second-to-none, here. You can clearly see the four (yes, four) progressive jackpots on top of the reels – the Mini, Grand, Colossal and Tres Magnifique amounts.

The question mark at the bottom left of the reels is where the paytable is hiding, while the bet amount is adjusted via the up arrow above the stake at the bottom right. You have a spin button on the right, but just underneath that the spin button with a play symbol inside hides the autoplay feature.

We’ve seen where the payout table can be found, and it has a wild symbol represented there, along with four characters from Kooza Cirque du Soleil. There are also two masks and some standard K- and Q-style symbols.

It also shows you the other main symbols that trigger the special features in the game. Take your time to read through the game instructions as it does make life much easier.

Right – there’s a lot to cover in the Kooza Cirque du Soleil Slot so let’s get started. Firstly, you have mystery stacked reels that appear on each spin. This means one or more symbols could be replaced by one of 10 other symbols in the game. Have a few free spins to practice and you’ll see how it works. You’ll be impressed by the tableaux that can appear over the reels as they spin, before you see which reels are stacked.

The first bonus you can get is the Box Pick Bonus. This is triggered by a bonus box appearing on each of reels one, three and five. You get to choose one of the boxes to reveal a cash prize before continuing with the main Bally Technologies Kooza game.

Second is the bonus wheel. You can find this by getting a bonus symbol on reels two, three and four simultaneously. When you spin the wheel, you’ll get one of the following prizes:

And finally… we have the Wheel of Death free spins. You’ll receive between seven and 12 free spins here, and the multiplier will be between 2x and 4x. However, you can win more free games during this feature, with up to 15 further games up for grabs. And yes, the mystery stacked reels come into play in these games, too.

There is a large range of bets to suit every pocket here. Just 20p will spin all the reels with 40 paylines to win on, while you can take that up a good few notches to reach the £400 bet as well.

The biggest prize is awarded for five wilds. The prize depends on the bet you make, but you can adjust this to get an accurate reflection of potential prizes for your own bet amount. Overall, you could win up to 250,000 coins from one game.

Finally, the game presents you with a return-to-player percentage of 96%.

You’ll find the Kooza Cirque du Soleil Slot at the best UK slot sites, but is it worth playing? We think so. There is a lot to get your head around when playing the game, particularly since there are so many bonus features. Our advice would be to try the autoplay feature first, and then to progress from there. This is one of those games where reading the instructions will only get you so far. Once you start playing, all will become clear in the Cirque du Soleil Kooza slot game.