Metal rock meets gaming slot in this innovative and lively musical themed slot. One of the latest NetEnt slots to hit the gaming scene. This innovative and memorable slot is devoted to the work of rock group Motorhead and pays homage to some of their greatest hits. With some great features and bonuses to enjoy, read on to discover why this new slot is definitely worth a play. 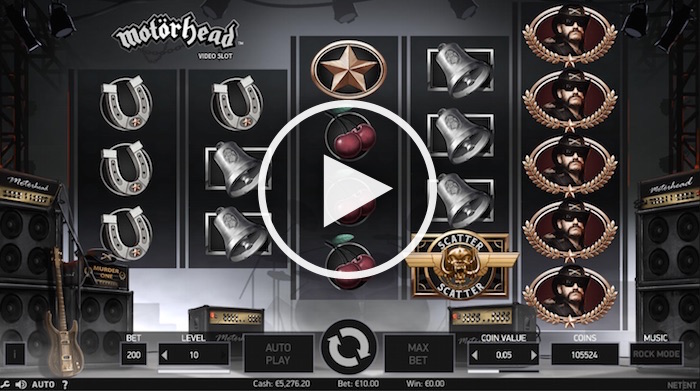 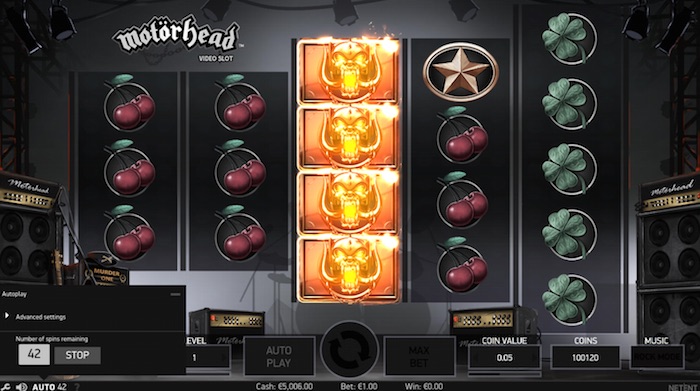 The opening gives you a good introduction to the world of Motorhead and helps set the desired atmosphere for the slot. You get to experience a snippet of a real-life concert and the attitude and mood of the band. They’re full-on, serious metallic rockers and you’ll know it after watching and listening to this!

This is a rock concert of a slot game!Adam Dale - Slotsquad

At first play, it seems disappointing that we don’t immediately get treated to more Motorhead music, especially after the lively introduction, but look carefully, and you’ll find an option to turn it on. Click on the rock mode button on the button right hand side of the screen, and they’ll be music to your ears. In fact, you get to hear four of Motorhead’s most popular tracks – Ace of Spades, Overkill, Killed by Death and Iron Fist.

There are plenty more musical treats in store too. For example, every time you hit a winning line, you’ll be treated to a magnificent sound and light show. Those rock stars love their strobing lights! This is why there’s a warning before you play the slot that it might not be suitable to play if you’re affected by flashing light effects.

Some winning lines give you some fab fire effects too. There are no corners cut here; you get the full rock style!

As you’d expect, the graphics give the impression of the action happening on a live music stage. There there are huge amplifiers and speakers surrounding the reels. If you’ve played some of Net Entertainment’s other musical rock-themed slots such as Guns N Roses, then it’s a similar set up here.

The game itself is easy and enjoyable to play. What’s more, it’s compatible with a range of devices, meaning you can play online, on your mobile or a tablet.

The Motorhead slot features a range of symbols on its reels – including lots that you’ll no doubt be super keen to land on!

The Ace of Spades is the wild symbol and substitutes for all other symbols, accept the scatters. The Scatter is easy to spot, in a gold rock band emblem style.

At the top of the symbol payout list is one of the rockstars, closely followed by a gold star, bell and number seven . You’ll get winnings for landing 2 to 5 rockstars on winning lines, while most of the other symbols only payout for between 3 and 5 appearances.

Other symbols include a lucky horseshoe, a bunch of cherries and a four-leafed clover. It makes a pleasant change to find a slot that doesn’t plague you with the usual barrage 10, J, Q and K symbols. Take note, game developers!

The amount you can win depends on their amount you bet. So you might want to take that into consideration when you decide on a betting level.

The Motorhead game has three special features, which help add to the anticipation and fun of playing. It’s possible to get the Mystery Reel feature on any spin, including the Free Spin feature. The reel will appear with a set of stacked mystery symbols, which subsequently transform into one randomly chosen symbol when the reels stop.

If you get three scatter symbols on reels 3, 4 and 5 in the game, then you’ll be rewarded with 10 free spins. During the Free Spins feature, the Mystery Reels benefit from mystery symbols and wilds – so if you hit a good combination, this can result in some great wins.

But that’s not all. As an extra treat, there’s also the Bomber Feature. It’s randomly triggered during the game before your next spin occurs. You’ll see a number of bombs appearing on the reels and these produce overlay mystery symbols. When the bombs are generated and produce the symbols, the reels will spin.

The Motorhead online video slot has 10 different betting levels. This means you can play from as little as 20p per spin, right up to a top rate of £200 per spin. With such a wide range of options, there should certainly be something for all levels of betters.
According to NetEnt, the theoretical return to player (RTP) rate for this slot is 96.98%.

Finally if hard rock is your thing, or you’re a fan of Motorhead, then what’s not to love about this video slot? It’s one of the best online slots from NetEnt and makes a pleasant change from some of the more twee magical themed slots – of which there are many. If you weren’t previously familiar with the rock band’s music, you sure would be after playing this. And you could walk away with cash in your wallet too!