There’s just something cool about Sherlock Holmes. Sir Arthur Conan Doyle’s supercharged detective who along with Dr Watson solved some of the most mysterious and calculated crimes of the 19th Century, well on paper they did. The idea has spawned multiple big budget movies, television spin-offs and now something rather compelling for the online casino industry, the Sherlock Mystery Slot from Playtech. This review includes the best casinos and bonuses to play Sherlock Mystery! 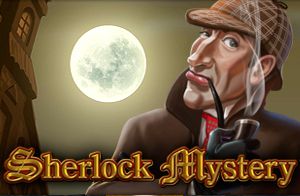 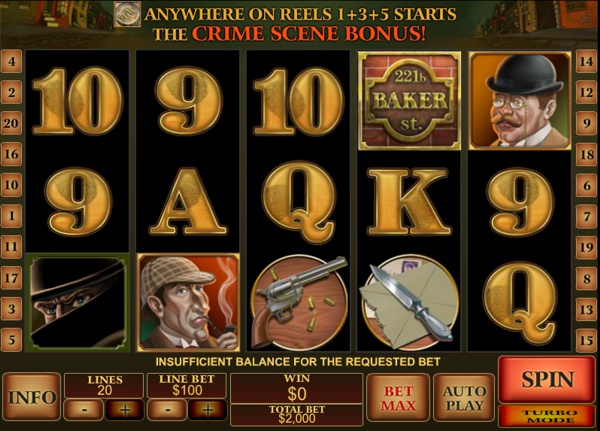 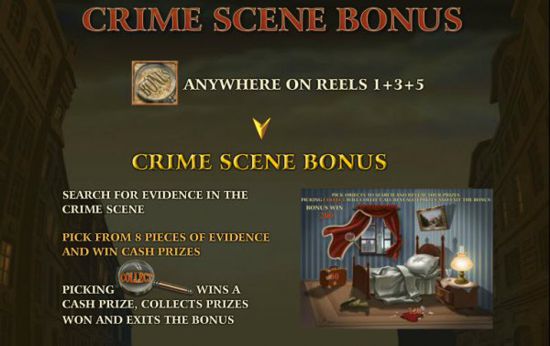 Playtech have chosen the charms of Victorian England to unleash the dynamic duo now reborn for the 2014 online gaming world. The mystery? It’s up to you to work out how Holmes and Watson can help fill those pockets of yours. It’s a bid to unravel the payout power that lies within the dark world of this five reel, 20 pay-line and 5000x base jackpot slot. It comes with nifty visuals, suspenseful sound effects and several well-driven bonus features. It also has an RTP of 94.09%.

Whether you want to play the Sherlock Slot for real money or via free play on some free spins gimmick, it’s good to know that Playtech’s mystery has credible punch and playability. The controls are well suited; the graphics are engaging, and the soundtrack that has you looking over your shoulder gives a sense that anything could happen “perhaps even winning”. It’s this combination that gives the game its edge; it has a purpose; great playability, possibility and players get involved with all of it.

20 pay lines and a wide spectrum betting range of just £0.01 to an exhaustive £2000.00 a throw make Sherlocks Mystery ideal for all caliber of casino player. Whether you sit tight at the low stakes, middle range for nice returns or hit hard with the high rollers, spin cost is exceptional between 20p and £2000 respectively.

The five reels of Sherlock move into place a variety of symbols and characters which can lead to bonuses, winning lines and multiple win features. If you’re going to win playing this video slot then it happens with the right combinations, thanks, Dr Watson! Starting in the lower ranks, and Playtech use the familiar card symbols for the lesser payouts. However, the Ace and King are still worth up to 300 x your line bet.

Moving up the winning line, and the Sherlock Mystery Slot has some weapons worth up to 400 coins in your sky rocket. More important and valuable images include Detective Holmes and Dr Watson, a magnifying glass which denotes the crime scene bonus and the baker street address which is the slots scatter. Evil weird Professor J Moriarty is the games wild and also its most valuable icon. 5 of these will pay 10,000 coins!

Playtech have kept things close to the story with a “chance to win real money in the process” making up the games most compelling investigation. The developers have done this by building the slots features around great detective work and by involving the characters heavily in the winning process. The result is Sherlock meets Watson, a free games capacity and the star of the bonus show “the crime scene round“.

Sherlock Holmes meets Dr Watson does exactly what it says on the tin. This slots winning multiplier kicks into gear when Watson lands anywhere on the reels “to the immediate right” of Holmes. It pays back 3 x your line bet in full and is considered one of the regulars for the winners. It’s your best chance take home!

For those looking to get free spins on the sherlock mystery online slot, it happens here. Keep an eye out for the Baker Street symbols for these because they’re very important for the freebies. 3 or more BakerStreet signs found anywhere on the reels will award ten free spins to your game plan. You’ll now get a random multiplier of either 2x, 3x or 5x for the prize associated with the extra wild (formerly a revolver) if a win gets awarded. Scatters at this point mean more free spins for the player!

If one single spin brings in the bonus magnifying glass on reels one, three and five then the games main “mini-feature” crime scene bonus begins. It’s now all about investigating a crime scene, selecting vital evidence and then revealing a cash prize for those chosen clues. You now collect everything you possibly can before the round ends with the conclusion that “you probably just won a great deal”.