Superhero slots are quite easy to find nowadays. We’ve got another one for you here, as Superman has finally got in on the act. NextGen Gaming has created the Superman slot, but whether it will be a winner remains to be seen… 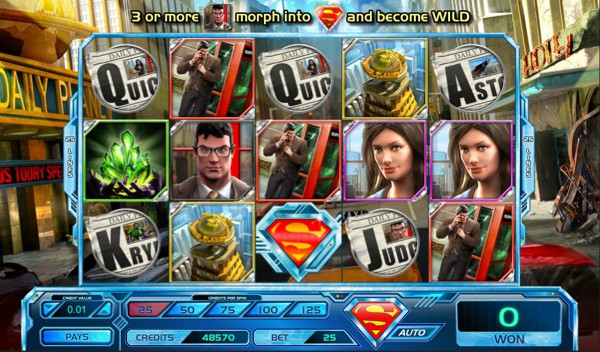 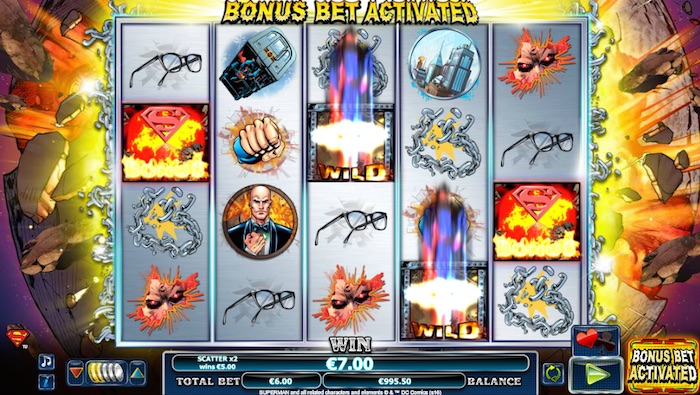 The Superman slot game comes from NextGen Gaming, and it’s a 5 x 4 game with four rows of symbols instead of the usual three. This makes the game feel bigger before you even start, and with 50 paylines it’s really necessary to have that additional row.

Superman is the latest superhero slot from NextGen and follows a trend of world-class games!Adam Dale - Slotsquad

If you know anything at all about Superman you’ll recognise many of the images and symbols in use here. It’s the latest in a series of excellent online slot games featuring superheroes, and it doesn’t disappoint.

It follows in the esteemed footsteps of such heroes as The Green Lantern and Batman, so it was really only a matter of time before Superman came along. (What news of a new Spiderman slot though, we wonder?)

Perhaps most importantly, though, is the fact the game looks and plays really well. So even if you’re not a particular fan of Superman, you’ll still have a great time playing it with all the associated features it offers.

The graphics are superb – it’s as simple as that. You’ll see the cityscape – complete with the Daily Planet statue – for the main game. Activating the Bonus Bet triggers some kind of explosion behind the reels, and this stays in place for as long as you play in this mode.

The actual gameplay itself looks impressive too – the wild Superman shoots off into the sky if he forms part of a winning combination. Wins are also indicated at the bottom of your screen as you play.

It’s easy to play too – the regular controls are exactly where you’d expect them to be, and the tiny little ‘i’ at the bottom left makes it easy to access the paytable when you need to.

The Superman slot has a variety of good symbols to spin into place on the reels. Superman is of course the wild, and is the highest-paying symbol too. Lex Luthor, Lois Lane and the Daily Planet globe are among the other symbols. The smallest-value ones include glasses and a fist – no basic A, Q or K ones here.

There are several pages to the paytable, and each one explains a specific feature of the game, as well as revealing the value of the symbols – some of which grant prizes for just two on a line instead of three.

If Superman shows up on the middle three reels, you will be awarded 10 free games. During this feature, Superman can appear on any reel in expanded form. This will happen on one reel in each spin, so it’s a good feature to have. If he helps you win a prize, that prize could be multiplied by as much as x5. You can’t retrigger the free games, though.

The Superman NextGen Gaming slot game also has a Bonus Bet feature. This adds a further 20% onto whatever stake you have come up with thus far. When you activate this, the background changes and the Save the World feature is made available. You need to find three bonus S logos in order to access the Save the World round.

In this round, Superman encounters a meteor shower and has to take out as many missiles as possible to find prizes for you. Once that part is over, he is faced with three doors. You’ll choose a door and find one of three things – hostages to rescue, Kryptonite (not good, as you can imagine) or Lex Luthor. The hostages will reward you with a cash prize, while finding Lex will deliver 100x your total stake before the game started.

Essentially, this feature is the bonus one, so while you can have free spins for playing the regular game with Bonus Bet deactivated, it’s well worth adding it in for the full experience of playing this superhero game.

Your minimum bet is 50p to play all 50 lines. The biggest bet is £100. Switch on the Bonus Bet and whatever bet you’ve chosen is increased by 20%. This means with the minimum bet you’ll actually play 60p a spin instead of the usual 50p.

At the other end of the scale, the maximum £100 bet is increased to £120 if you activate the Bonus Bet feature. Make sure you know what you’re betting before you begin.

Get five wild Superman icons on one payline and you’ll be rewarded with 10,000 coins – the top prize.

Finally, the return-to-player in the Superman online slot is calculated to be 95.40%. That’s not bad, but we’ve seen a few games that have produced slightly better odds for the player.

Did we like the Superman slot? As DC superhero online slots go, it does rank as one of the best. The Bonus Bet opens up another possibility for you if you bet that little bit more each time, and there are enough features to keep both fans and casual players interested. NextGen Gaming has produced another winner here, and it does suck you in.