Isn’t that a great title for a slot game? The question though is whether you will get rich pickings from the latest of the real money slots to be released by NextGen Gaming. Will the Witch Pickings slot offer way more than a fun title? 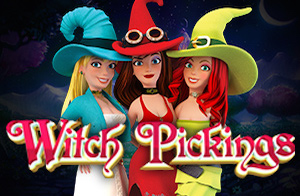 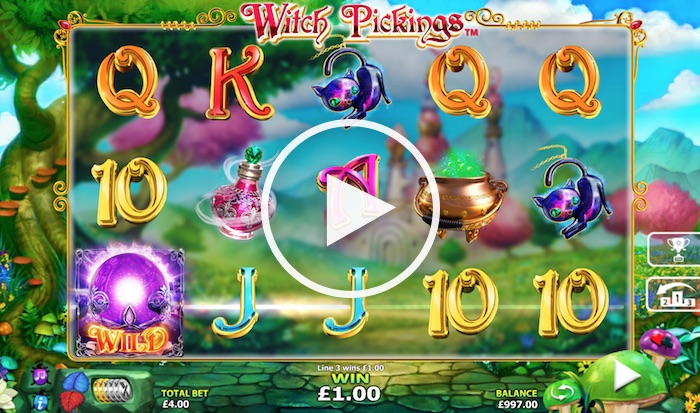 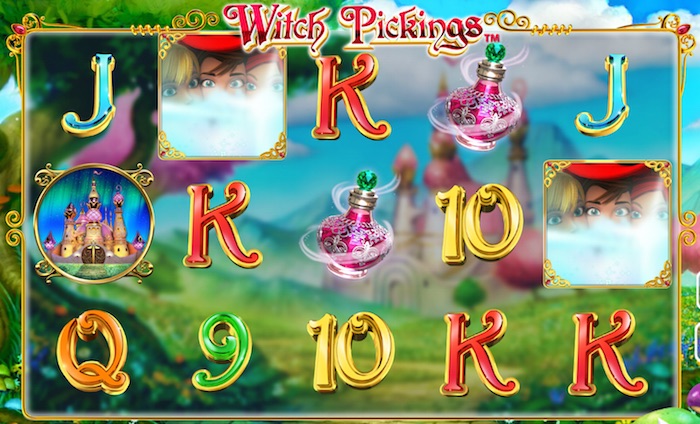 The Witch Pickings slot game by NextGen Gaming is a 5 x 3 online slot with 25 paylines packed into it. There are three witches in the game and you’ll be seeing a lot of them as the game progresses. It’s obviously a magical game based on a fairytale theme, but that’s not the whole deal.

The Trophy Room element puts Witch Pickings in a slots league of its own! James - Slotsquad Editor

We’ve seen a lot of slot games based on fairytales of various kinds, but this one does have much more depth than you might at first think. It’s more than just a good-looking slot. If we mention there is a trophy room, for example, as well as a whole array of nice features, you’ll understand how impressive NextGen’s Witch Pickings game actually is.

There’s a lot for us to get through here, but suffice to say if you like the idea of putting together your own bonus feature, keep on reading.

The graphics are simply stunning. A trail leads to a beautiful castle in the background, but everything behind the reels is slightly fuzzy, while the images at the edges are clear. The symbols are beautifully designed too, and we can definitely forgive them the inclusion of the K, Q and A-type symbols. Even they look impressive.

Once you start playing this slot you won’t want to stop. It’s got plenty of depth and the paytable takes up seven whole pages for good reason. It’s lovely to have a game that’s easy to play and yet provides you with features you won’t have seen anywhere else too.

You have wilds and scatters to explore first of all. The wild is a purple orb that moves when you hover over it on the paytable. It can net you the biggest prize available and replaces all other symbols with the exception of one – the scatter. This has the three witches on it. They’re very important because they can unlock the Witches Bonus feature.

It’s worth looking through the paytable before you start. You will not only find out about the standard features included, you’ll read more about the innovative ones as well. Symbols include the castle, a cauldron, a cat and a magic potion as well as the standard A, K, Q, J, 10 and 9 symbols.

Now let’s get to the real meat of the Witch Pickings slot game. Three scattered witches symbols will trigger the Witches Bonus. You’ll be taken to a screen where each witch has three features on offer. You can hover over them to reveal what they are. Pick one from each witch to decide which features you would like to see in your free spins.

You get five free spins as standard, but you can add another five on from the third pot if you decide to choose that feature. Other choices include expanding wilds, all-wins multipliers, symbol prizes, stacked symbols and wild multipliers. The third page of the paytable lists all the options and provides you with an explanation for each.

Basically, the first witch has symbol options for you, the second has wild options and the third has options relating to different ways to enjoy wins. This third witch is the one to offer the extra five games as well (we chose that when we got to the bonus feature).

Being able to create your own bonus feature is a superb option, and it fits in nicely with the theme of the game as well. You can also access the trophy room at any time in-between spins. This has two trophy shelves – one for the feature win multiplier prizes and the other for the bonus features won. It doesn’t appear to have the power to trigger any other prizes, but it is still nice to see how you’re doing.

You don’t pay a set amount per line here; instead, you get a variety of set bet amounts to choose from. The smallest of these is 40p, which plays all the lines and accesses all the special features in the game as well. The maximum per-spin bet is £80.

The biggest single prize to be won is 1,000 coins if you manage to get five wild symbols on one payline. Mind you, if you were to get this result in a free game with multipliers in play as well, you could get something bigger.

Finally, the payout rate (RTP) is very precisely noted in the paytable. It ranges from 95.792% to 95.938% over a period of time. There’s not much variation there which is encouraging.

Play at Vera and John Casino