Fittingly for Halloween, the Nightmare on Elm Street Slot from Random Logic continues to stalk casino players to this night. Now 6 years old, Freddy Krueger’s slasher slot game remains one of the scariest ways you can win money in an online casino. Boasting free spins, a stay awake feature, 30 pay lines and a pick a win game – A Nightmare On Elm Street slots into Halloween 2020 like a dream!

Read on for features, casino bonuses and the best UK casinos to play A Nightmare on Elm Street Slots. 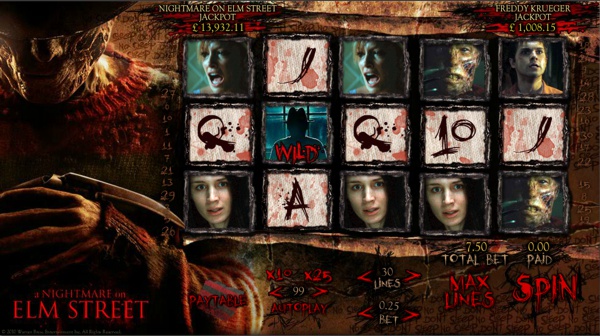 Anyone who remembers the 1980’s horror flicks involving teenagers trying to escape the clutches of evil Freddy Krueger will know that a Nightmare on Elm Street was in fact murder in your dreams. There was no escape from that steel claw and the menacing serial killer that wielded it. Good grief, this is terrifying stuff. A Nightmare on Elm Street slot is a five-reel progressive jackpot game based upon the horror franchise of finger blade serial killer Freddy Krueger. It has 30 pay lines, expanding wilds, a horrifying bonus round and a cut throat base jackpot of 10,000 coins. 1, 2, Freddy’s coming for you.

It was gruesome, gory, scary and original; Freddy became an icon that scared the living daylights out of everyone. I remember those video boxes in the newsagents, and they were pretty horrifying. So the news that 888 Casino was putting their best slots team onto the development of a game based around a Nightmare on Elm Street was horrifying too, but we still wanted to see and play it. It is now one of the two most popular slots at 888.com.

There’s a darkness to Elm Street that will send chills down the backs of slots players!Adam Dale - Slotsquad

Nightmare on Elm Street is a compelling horror-themed online slot that uses graphical elements, video scenes and spine-tingling sound effects from the slasher movie that haunted the dreams of unlucky teens. In terms of graphics and design Random Logic have opted for crucial components that give the game its chilling atmosphere. It’s dark in nature; bloodied reel symbols add the shock value and the animation during win lines even slash across the screen. The playability factor is high for real money players who want the horror element with their gameplay and a fearful experience that few other slots can deliver.

A Nightmare on Elm Street slot has 30 pay lines and a wide betting range making the game suitable for the entire cash player spectrum. It means that coin values of between 1p and £10.00 played up to 300 coins offers a feasible betting option to everyone. Spins cost from just 30p at the lowest bet covering all pay lines and £300.00 per spin as the maximum bet covering all pay lines. The slot features two jackpots with a base game top prize of 10,000 coins and a progressive jackpot that can pay an absolute fortune. Betting big with Freddy is probably best.

The theoretical payout rate or RTP for a Nightmare on Elm Street slot drifts between 94.9% and 95.8% due to the fluctuation of the casino games progressive nature. It is a competitive and viable payout rate that the 888 Freddy Krueger slot uses in comparison to other slots.

In the pay table, you can see that the “Never Sleep Again” warning activates the bonus game and that Freddy’s claw of knives represents the Scatter function and the free spins core ingredient. Other symbols include card values 10 through to Ace, a set of willing victims and good looking Freddy himself.

There’s a reason cash players have made Elm Street one of 888 casinos most popular slots, and that’s this bit. If you start mixing free spins and multipliers with the possibility of a major progressive win, you can turn terrifying nightmares into seemingly profitable dreams.

The Never Sleep Again bonus activates upon finding three of the bonus symbols anywhere on the reels. This mini-game is all about staying awake to win cash before you fall into the Nightmare with Freddy Krueger. Players must choose items such as Television, Coffee or a Phone to ensure they do not fall asleep. The more items you manage to collect the more money you will win. Snooze and you lose!

If you’re looking for free spins on a Nightmare on Elm street slot, the scatter will do that for you. Three scatters will award ten free spins, four scatters 20 free spins and five scatters thirty spins. It’s a feature that, unfortunately, does not utilise the multiplier function or offer a re-trigger possibility. But it’s still good.

The expanding Wild is also worth noting and is a good inclusion to the slots bonus capacity. 888 casinos Nightmare on Elm Street offers an expanding Wild that awards a 2 x multiplier on all associated wins for this function. All you need to do is land the Wild on reel three and Freddy Krueger comes out to play for real money.

The slot also features two progressive jackpots which is also one of the main contributors for its popularity amongst cash players. The two jackpots are the Freddy Krueger jackpot and the Nightmare on Elm Street jackpot. Both payouts are completely random and awarded at any time; it is the Nightmare on Elm Street jackpot that is the larger of two prizes. The more money players bet, the greater the chances of triggering such a payout will be.

A Nightmare on Elm Street is one the two top slots at 888 Casino and one of the darkest slot developments ever made using Random Logic software. It’s not one for the faint-hearted so stay well clear if you like playing bubble slots and candy crush games. Fans of Freddy Krueger along with horror-themed casino slots will no doubt love this one, as will the real money hound dogs looking for one of the two progressive jackpots featured. Elm Street has it all, free spins, expanding wilds, high-spec graphics, engrossing in play features and the creepiest atmosphere in the gaming industry. Final bit of advice, don’t play in the dark. “Was that the sound of knives” 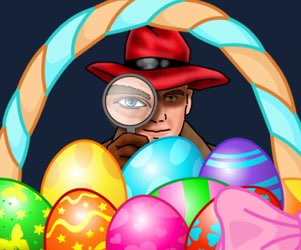 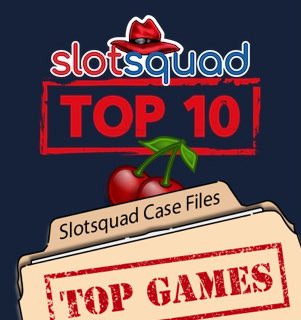 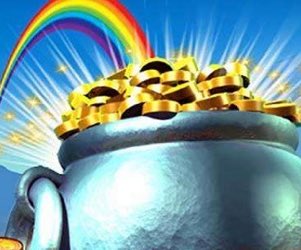 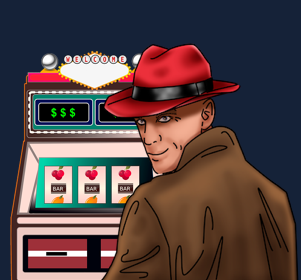 What is Slots RTP and how do payout percentages work?

Game of the Week

A great slot with great features, one not to miss. 96.2% RTP